Everything you need to know to navigate the world wireless speakers

Wireless audio once meant radio. Inside the home, it was a different story. The receiver – your radio – plugged into a wall outlet. That was enough for self-contained mono units. When stereo came along, a pair of speakers, separated by some distance, made recorded music more life-like, but at a cost of increased complexity. Speaker position, still important today, required cables from the receiver and amp to the speakers themselves. Optimal placement was often compromised due to wiring. When home theater surround sound systems appeared, the wiring game multiplied in complexity.

The solution was obvious all along, but it took a while for technology to catch up. Engineers looked for ways to eliminate wires to speakers. If sound could be sent through the air from radio station to home, there must be a way to send sound across a room. Radio frequencies seem the obvious solution. It’s not the only solution, but it’s emerged as the most versatile. Let’s take a look at the practical options for wireless speakers in today’s market. 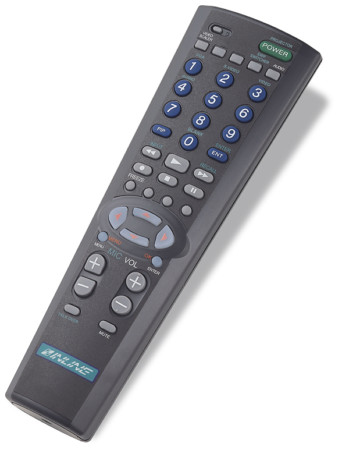 By far the most common infrared – or IR – technology in most homes is that of the humble television remote. For those old enough to remember, the first TV remotes were wired to a box near the TV itself. It was during the boom years of cable. Not much fuss was made over the wired box, since viewers were freed from the 13-channel dial. Youngest children everywhere had to get up and rotate that dial at the whim of parents and siblings.

IR made the entire viewing experience more relaxing. Since the viewer was now more or less stationary, the surround sound concept, first pioneered in movie theaters, became practical in a home setting, save for that problem of wires. Yet, IR is an ideal in-room wireless data exchange medium, and sure enough, it popped up in surround systems, sending audio from the home theater receiver to rear position speakers and subwoofers, the elements that prove the hardest to position and wire.

Infrared has limits though. It’s a line-of-sight technology. The receiver must “see” the transmitter directly, since signal takes the form of light, though it’s beyond the visible spectrum. Placing a wireless speaker in another room doesn’t work, since walls block the IR signal.

Once wireless routers took hold in home settings, a truly connectible home experience began. It was a short hop from Internet to router to computer to computer music player. Audio streaming from the Net grew. Companies such as Pandora and Spotify emerged. Digital music stores replaced their bricks and mortar versions. Then companies such as Apple and Sonos recognized that the computer didn’t need to be the end source for audio. Computers, smartphones and tablets could do much of the setup work, connecting smart speakers with wireless routers. 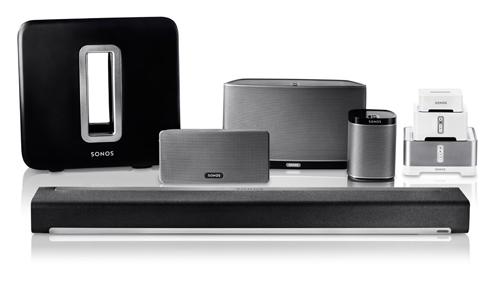 Wi-Fi has a number of advantages for audio. Its broadcast distance makes it suitable for whole house sound systems from a central audio controller. Walls don’t matter, as Wi-Fi signals penetrate these. The data bandwidth allows for minimal compression of the sound source, key to hearing high quality audio at the business end of the speaker system.

If Wi-Fi has a drawback, it’s that its power consumption dictates connection to a wall outlet. Sure, it’s free of audio cables, but electrical demand is too much for rechargeable battery use. It’s still a semi-wired wireless system.

When it comes to flexibility and ease of use, Bluetooth is proving to be the de facto standard. Visit any audio shop and Bluetooth speaker offerings far outnumber Wi-Fi and IR competitors. While it’s not without its shortcomings, Bluetooth speaker technology is quite versatile.

Like Wi-Fi, BT signals go through walls, so speakers can locate in separate rooms. Information streaming rates currently support near-CD quality audio. Best of all, Bluetooth is a very low energy consumer. This means true portability for BT wireless speakers. Depending on volume, some speakers play for 24 hours between charges. While of course a Bluetooth speaker remains tethered while charging, it’s really the only speaker technology offering completely wireless portability for operation.

Not all BT speakers are designed for purely portable operation. There are bookshelf style speakers with dedicated power cables like Wi-Fi devices, so that option remains when it’s the consumer’s choice. Read more about Bluetooth for audio here.

For a closer look at the finest Bluetooth speakers on the market, take a look at this report.

Technical Issues and the Future of Wireless Speakers

Just as a wall gets in the way of an IR signal, atmospheric interference and electromagnetic noise from other devices in your house can briefly interrupt any wireless signal, causing audio to drop out, add noise or break connection. The technology constantly improves, so these issues will fade with time.

Data compression does impact sound quality. Serious audiophiles won’t be sold on the sound of most wireless audio, but neither have they bought into the quality of MP3 compression, which the clear majority of listeners accept as standard.

Wi-Fi’s chief disadvantage technically is power consumption. Perhaps not surprisingly, low-power Wi-Fi is in the works. Whether it will permit a game of catch-up with Bluetooth speakers remains to be seen. The key takeaway here is that current limits of Bluetooth and Wi-Fi technology are temporary.

There’s a bigger challenge to Wi-Fi and that’s interchangeability. Bluetooth has quietly spread its roots, building into laptops, computers, tablets and smartphones. That convenience is important to wireless speaker consumers. Even if Wi-Fi solves the portability issue, the key players in Wi-Fi audio use proprietary systems versus Bluetooth’s open source, multi-platform nature.

If anything is certain, it’s that the audio world’s dependence on wires and cables fades with each generational improvement. Who knows? Near Field Communication may replace wiring between audio system components. Time will tell.