8 Best Ovulation Predictor Kits You Need to Check Out Today

If you’ve decided you’re ready to tackle the challenge of parenthood and want to increase your odds of getting pregnant, then you might be interested in an ovulation predictor kit.

An ovulation predictor kit can help you identify when an egg is about to be released by one of your ovaries by tracking the increase of your luteinizing hormone levels (also known as LH levels). The best time to try to get pregnant is usually a day or two after the hormone peaks which is followed by the release of the egg.

When properly used, the ovulation kits are about 99 percent accurate. However, it is possible for some women’s luteinizing hormone levels to increase but not produce the egg and other women, who may have conditions like polycystic ovarian syndrome, might have false readings due to hormone increases, but not peak luteinizing levels.

Just like pregnancy tests, many companies say they make the most accurate and best ovulation kits, so it can be daunting to find the right one. That’s where this guide can come in handy.

Since accuracy is vital to us, we examine customer reviews and testimonials, data about ovulation prediction kits, and general brand reputation and combine these factors into our rating.

The Easy@Home Ovulation Kit is one of Amazon’s top sellers and considered by many to be one of the best ovulation kits. It was specifically designed to help women who are trying to become pregnant naturally by helping to spot your most fertile time frame, even if the length of your cycle may vary every month. 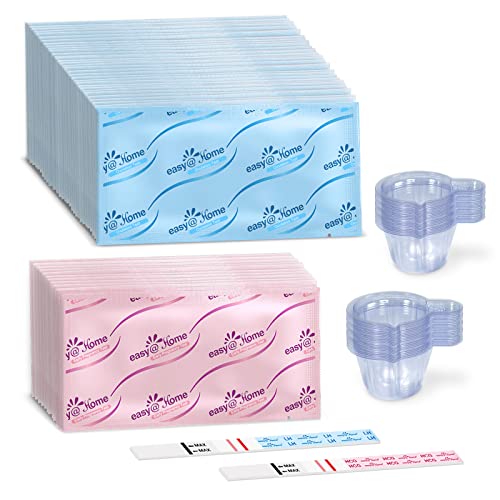 The kit includes 20 pregnancy test strips and 50 ovulation strips to keep track of your cycle and reduce the odds of not tracking the surge in luteinizing hormone levels. With 50 pieces you’re covered for more than one cycle unless there are days you want to test twice a day to make sure you’re reading the dark “hormone surge” lines correctly.

The kit can help you determine if you have gradual LH onset, where you might ovulate up to a week after peak LH levels, or rapid LH onset when ovulation is likely to take place within 24 hours of your peak LH reading.  The pregnancy test strips can pick up on low levels of HCG, and the results are correct 99 percent of the time.

The Premom app can even help women with menstrual cycles that are not regular by predicting your ovulation window five days beforehand so that you can know when you have the best chances of becoming pregnant. You can also use the app to keep track your basal body temperature and your period to further increase your odds of achieving your goal.

The Pregmate 50 Ovulation Predictor Kit includes 50 ovulation test strips that are 99 percent accurate in spotting your surge window. Ovulation should typically take place within 24 to 48 hours after a positive result on your strip, and your egg is fertile for around 24 hours after it is released from the ovary so when the Pregmate strip indicates your LH is at the peak, there’s no time to waste. 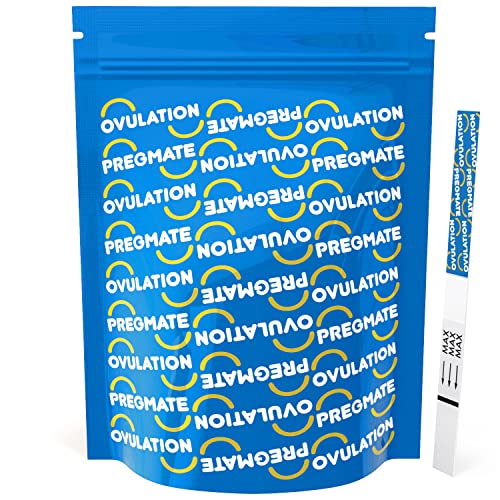 To test your LH levels, you dip the strip in your urine for about three seconds, put the strip down on a flat surface, and in about five minutes you should see if there’s a line that is about as dark as the control line provided on the strip. If you see 2 dark lines on the strip, then you have a positive result and typically the best time to get busy is between 24 hours to 48 hours after your test.

A faint line is considered negative or a line significantly lighter than the control line is a negative result for hormone surge. The best time to test would be in the afternoon, and you should limit how much you drink for a few hours before you try so that your hormone levels are not diluted and undetectable in your urine.

If you’re looking for what doctors say is the best ovulation kit, then you might want to try the Clearblue Ovulation Test since it is the brand most recommended by obstetricians and gynecologists. It can determine the two best days that you should be able to get pregnant with 99 percent accuracy at picking up on your LH surge. 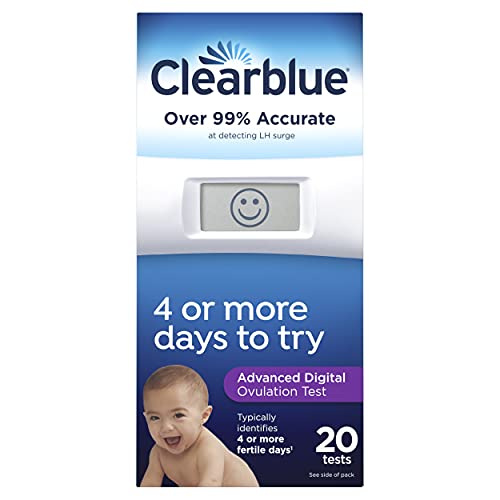 The kit includes 20 strips to collect urine and 1 digital test holder. Instead of comparing line colors and your line against a control line, the Clearblue digital test will let you know your hormones are surging by displaying a smiley face in the window. A flashing test symbol will indicate that the test is functioning, and you should know your result in about three minutes.

With this test, you don’t urinate on the strip and then insert it into the test holder. The test strip should already be in the holder before you collect your urine sample.

iProven’s Ovulation Test Kit includes 50 ovulation strips and 20 pregnancy test strips so you can know if you’ve been successful at conceiving. The ovulation strips are made to meet FDA standards to pick up on 25mIU per milliliter, and the pregnancy strips can let you know if you’re pregnant as early as the first day that your new cycle is supposed to start. 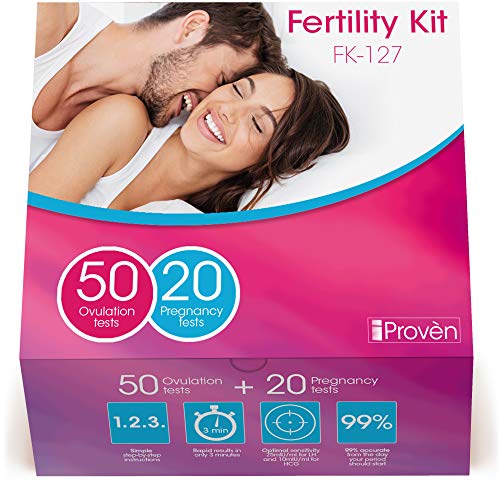 You only have to dip your ovulation strip in your collected urine for about five seconds, and you should have your results within three to five minutes. A solid line that is comparable to the control line tells you that your LH hormones will surge and that you are approaching your fertility window. A faint line or no line means it’s not time yet.

Many women said they highly recommend the test and it gave them more consistent results than some other brands they tried. Many of those buyers were happy to share that they were able to conceive.

With 50 ovulation test strips, the Wondfo Ovulation Kit has enough strips to help you track your ovulation throughout more than one cycle to make sure you don’t miss your LH surge window. The kit also includes 20 pregnancy test strips that, per FDA standards, can pick up on HCG hormone in your urine even before your next period.

Wondfo guarantees customer satisfaction, so if you’re not happy with your kit, you can contact their customer service department for a refund or a replacement. Dip the strip in your urine for about three seconds, and if you see two solid lines, you have a positive result for your LH surge and should be approaching your peak fertile days. 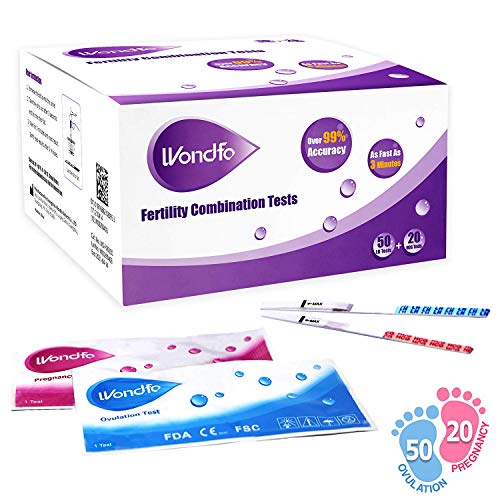 If you don’t see two lines or the line next to the control line is very faint, that is considered a negative result for LH surge.

Many women felt their results were more evident with the Wondfo strips compared to other brands that they tried and said they would recommend it to other women who may need help tracking their hormone surge. 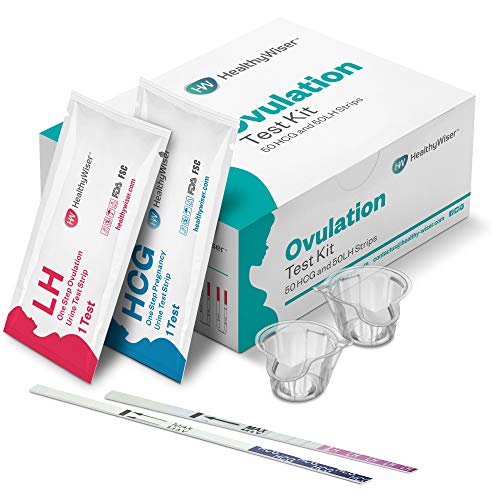 Well, HealthyWiser has thought about that which is why if you buy their kit, you’ll receive 100 small cups with your purchase, so it’s one less thing you have to worry about having on you.

Many buyers said the strips worked well if you know what you’re doing, and they would recommend them to those who are trying to track their LH surge and ovulation. However, some women said they were getting false-positive results.

ClinicalGuard’s Ovulation Test Kit comes with 40 ovulation test strips and 10 strips that you can use for pregnancy tests.

To test for your peak LH surge, collect your urine in a receptacle, dip the ovulation strip, and lay it down flat for about five minutes. If you see a dark band that matches the control line, then you’re in a peak fertile period. If your line is faint or no line appears, then you are getting a negative result, and it’s not quite “go time.” 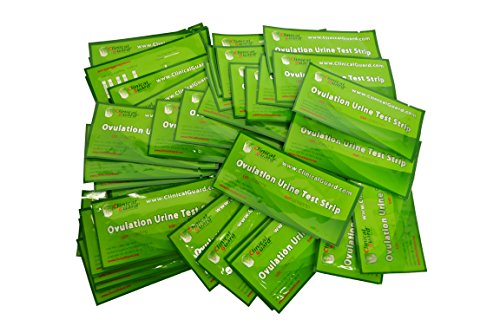 The pregnancy test strips have a high sensitivity to detect any HCG in your urine that could indicate that you’re pregnant.

Many buyers felt that ClinicalGuard worked better and more consistently than ClearBlue, even if it wasn’t digital.

For the digital readout, if your LH is low, then you’ll only see a circle in the window. When your LH is indicating that you’re in a high fertility time, then the display will show a flashing smiley face. When you’re LH is at peak levels, then the smiley face outline will be dark and stand out more.

And that’s not all

The Advanced Ovulation Kit also tracks two fertility-related hormones. Besides your LH levels, the strips will also test your estrogen levels and let you know which four days of your cycle are best for trying to get pregnant. Once you see that you’ve reached peak fertility time, then there’s no need for further testing during that cycle.

The Clearblue Advanced includes 20 test strips, and the test is supposed to identify your LH surge with 99 percent accuracy. Unlike some other ovulation tests that say you should use the strip in the afternoon, with Clearblue, you test once a day, and they recommend that you do it when you first wake up.

What are some things you should look for when you’re about to buy your ovulation prediction kit?