The 9 Best Aerosol Air Fresheners to Buy This Year – BestSeekers 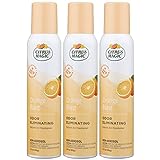 The Citrus Magic Air Freshener is what we found to be our top pick for our list of Air Fresheners. This air freshener comes in three different fragrance choices which you can choose from. You can choose between the Fresh Orange Fragrance, the Pink Grapefruit fragrance and also the Tropical Lime fragrance. What we really liked about this air freshener is that it uses all natural ingredients so you will not inhale any chemicals that can be harmful to your body. Furthermore, it leaves a lasting fragrance which can last more than four times longer than most of the other aerosol air fresheners that are out there. The air freshener is capable of removing all kinds of odors as well as leaving a burst of fresh fragrance in the room.

This is a much cheaper option for an air freshener, however it is also one of the best that are out there. The North American NA222-6 Pure Citrus Orange Air Freshener comes in three different scents. There is the Orange fragrance, Lemon and Citrus Blend fragrances that you can choose from. The air freshener consists of all natural ingredients, including natural fruit extracts in order to give you a clean and refreshing fragrance. There are no artificial perfumes or other chemicals that are added to the product to give its fragrance. It is also free from hydrocarbons and fluorocarbons. There are also different size options that you can choose from, with the biggest being the six pack option. 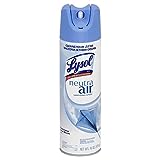 The Lysol Neutra Air Sanitizing Spray offers you four different quantity options that you can choose from. The spray comes in only one scent, the Fresh Breeze fragrance and there is no option to choose any other fragrances. However, it is one of the best air fresheners out there due to how effective it is in not just making the air around you much more fragrant, but also in killing bacteria that is present in air. The spray can effectively remove odors and also kill the odor-causing bacteria, therefore making the air a lot cleaner to breathe. The aerosol can that it comes in contains 16 ounces of liquid, so you can expect it to last a fair bit of time.

This is one of the more expensive options for an air freshener, but is also one of the more effective ones as well. The air freshener excels in making the air a lot fresher with its natural fragrance. You have the option of purchasing a single can of Pure Citrus Apple-Cinnamon Air Freshener which contains 7 fluid ounces of liquid, or you can go for the six pack option which will give you better savings. Sadly, there are no choices of picking other fragrances as the air freshener only comes in the Apple Cinnamon fragrance. The reason why it is so expensive is because it contains 100% natural apple and cinnamon oil, thereby does not have any perfumes or other chemicals. It is able to get rid of any odors naturally as it does not contain any artificial ingredients. This may not be the best option if you are looking for a cheap air freshener to buy however.

Glade is probably one of the most popular brand names out there when it comes to air fresheners. This still makes it quite expensive, but due to its good reputation in delivering quality air fresheners, it still makes for a great pick. The air freshener can effectively eliminate any odor in the air and also make it a lot fresher to breathe. It is great for using indoors, in places such as your kitchen or bathroom. The air freshener comes in a 9-ounce steel can which is recyclable, therefore making it environment-friendly as well. Apart from this, the process that is used to fill the can uses a large percentage of renewable energy, thereby preventing wastage of non-renewable energy sources. The cap is designed in such a way as to make it a lot easier to hold and to spray. 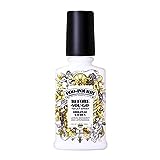 The Poo Pourri Original Citrus Spritz has revolutionized the way people use the bathroom in public. This toilet spray is an innovative way to combat unpleasant yet necessary odors that may occur when you are taking care of some personal business. This unique toilet spritzer as a refreshing Citrus scent that is as appealing as the formula is effective. The Poo Pourri Original Citrus Spritz is a unique blend of different natural essential oils that work their magic by trapping odors under a barrier that forms right above the surface of the toilet water. When you use the bathroom, any unpleasant odors will get trapped in the water right under the barrier so that they do not escape into the air. 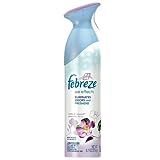 If you don’t mind spending a fair bit of money on your air freshener, then the Febreze Air Freshener, Air Effects is one of the top quality air fresheners out there. You can choose from a wide variety of quantity options, with the six pack option giving you the best value for your money. There are two different variants of the air freshener. There are the Spring and Renewal, natural fragrance air freshener and the Advanced Odor Eliminator, which is more effective at removing strong odors. We preferred the Spring and Renewal air freshener due to its versatility of not just being able to eliminate odors, but also to fill the room with a fresh fragrance. What makes this air freshener so special is that it is able to effectively eliminate odors, rather than just temporary conceal them like you would get with most other air fresheners out there. This makes it great to use in places like your bathroom or kitchen, which tend to have a variety of unpleasant odors usually. 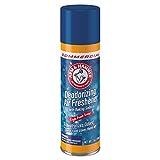 The Arm & Hammer CDC 33200-94170 Baking Soda Air Freshener is quite unique in that it contains baking soda, which is not commonly found in most of the other air fresheners. If you purchase the air freshener in the 12 pack size that it comes in, then you will not have to pay much per can of air freshener. However, if you were to purchase a single can of the Arm & Hammer CDC 33200-94170 Baking Soda Air Freshener then it may be a little bit more expensive than most of the other air fresheners out there. Its special property lies in the fact that it can deodorize the room with its light scent. It is quite effective in absorbing even the strongest odors, due to the unique formula that it uses, which included baking soda as well. The only real drawback of the product is that it comes in only one fragrance and there are no options of selecting a different fragrance.

The only reason why we have placed this at the bottom of our list. However, this is still one of the best air fresheners out there due to it being very health friendly with its all-natural ingredients. The air freshener comes in the pack of 12 option and there is no option of purchasing a single can. Each can in the pack contains 7 ounces of liquid which is close to the standard when compared to the other air fresheners as well. It comes in the Cinnamon Spice fragrance which gives a very unique fragrance when compared with the typical fragrances of air fresheners. There are no options of selecting different fragrances.